Can you make seawater drinkable?

As you may already know, humans cannot drink seawater as an alternative to freshwater. Seawater is full of salt that typically dehydrates the human body.

But what if we could make seawater safer to drink? It turns out that we can and the process is called desalination. Desalination is a process that removes dissolved minerals (including but not limited to salt) from seawater, brackish water, or treated wastewater. A number of technologies have been developed for desalination, including reverse osmosis (RO), distillation, electrodialysis, and vacuum freezing. So why is seawater such an attractive water resource that we go through all those costly process to make it safe to drink? 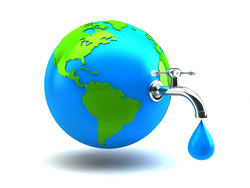 Here are a few reasons...Seawater provides an unlimited, reliable water supply for coastal populations worldwide; brackish water is a plentiful, relatively drought-proof water resource for inland populations and reduces dependency on imported water. And, of all the Earth's water, 97 percent is saltwater, only 1 percent is fresh water available for humans to drink, and 2 percent is frozen. Of the more than 7,500 desalination plants in operation worldwide, 60% are located in the Middle East. The world's largest plant in Saudi Arabia produces 128 MGD of desalted water. In contrast, 12% of the world's capacity is produced in the Americas, with most of the plants located in the Caribbean and Florida.

To date, only a limited number of desalination plants have been built along the California coast, primarily because the cost of desalination is generally higher than the costs of other water supply alternatives available in California (e.g., water transfers and groundwater pumping). However, as drought conditions occur and concern over water availability increases, desalination projects are being proposed at numerous locations in the state. Desalination costs are decreasing as technology improves and more plants are built. Today there are more than 15,000 desalination plants in 120 countries. The desalination market is forecast to grow more than $70 billion in the next 20 years. About half of the world's desalted water is produced with heat to distill fresh water from seawater.

The distillation process mimics the natural water cycle in that saltwater is heated, producing water vapor that is in turn condensed to form freshwater. One such treatment process is called Multi-Stage Flash Distillation. Another desalination treatment process with the most expanded use is membrane-based reverse osmosis. In this process, pressure is applied to the water, which allows water to flow through a membrane, leaving the ions, salts, and other dissolved solids and nonvolatile organics behind.