The store will not work correctly in the case when cookies are disabled.
2/3 - 2/5 Flash Sale: Free Shipping on Entire Order.
Menu
Account

Nitrogen is one of the most abundant elements. About 80 percent of the air we breathe is nitrogen. It is found in the cells of all living things and is a major component of proteins. Inorganic nitrogen may exist in the free state as a gas N2, or as nitrate NO3-, nitrite NO2-, or ammonia NH3+. Organic nitrogen is found in proteins and is continually recycled by plants and animals. What is the environmental impact of nitrogen: Nitrogen-containing compounds act as nutrients in streams and rivers. Nitrate reactions [NO3-] in fresh water can cause oxygen depletion. 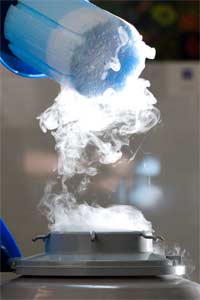 Thus, aquatic organisms depending on the supply of oxygen in the stream will die. The major routes of entry of nitrogen into bodies of water are municipal and industrial wastewater, septic tanks, feedlot discharges, animal wastes (including birds and fish) and discharges from car exhausts. Bacteria in water quickly convert nitrites [NO2-] to nitrates [NO3-]. Nitrites can produce a serious condition in fish called "brown blood disease." Nitrites also react directly with hemoglobin in human blood and other warm-blooded animals to produce methemoglobin. Methemoglobin destroys the ability of red blood cells to transport oxygen. This condition is especially serious in babies under three months of age. It causes a condition known as methemoglobinemia or "blue baby" disease.

Water with nitrite levels exceeding 1.0 mg/l should not be used for feeding babies. Nitrite/nitrogen levels below 90 mg/l and nitrate levels below 0.5 mg/l seem to have no nutrients are essential for plant and animal growth and nourishment, but the overabundance of certain nutrients in water can cause a number of adverse health and ecological effects. To determine the extent of nutrient and other types of contamination in the Nation's streams and groundwater, we analyzed data from about 12,000 ground-water samples and more than 22,000 surface-water samples collected at more than 300 sites between October 1979 and September 1990.

Most samples had been collected within NAWQA study units. Nutrient concentrations in water generally are related to land use in the upstream watershed or the area overlying a groundwater aquifer. Nitrate concentrations were generally higher in groundwater than in streams. Concentrations were highest in the Northeast, Great Plains, and along the West Coast. Drinking water from public-supply wells and domestic-supply wells outside of agricultural areas is not likely to have high levels of nitrate. Domestic supply wells in agricultural areas are more prone to increased concentrations. Ammonia and phosphorus concentrations in surface watersurface water are highest downstream from urban areas. Where these concentrations are high, they warrant concerns about decreased oxygen in the water, toxicity to fish, and accelerated eutrophication.

Read Next: Protect your Baby from Nitrates & Nitrites