DO WE HAVE ENOUGH WATER FOR THE FUTURE?

Many hundreds of books and movies have peered into the future to imagine a world that is overrun by environmental disaster or perpetual war. Only a few movies delve into a much more real future problem for our world…the availability of water. 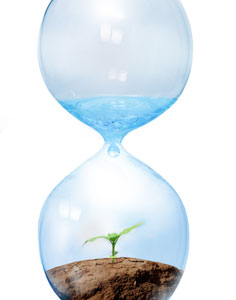 When one looks at the data, it cannot be denied that humanity is approaching a self-generated environmental crisis. The perception of the crisis in which we find ourselves has appeared in models developed for and described in the report "Global 2000". These reports give the impression that the ultimate downfall of human civilizations under the cumulative effects of population increase, resources depletion, and degradation of the environment is imminent and almost unavoidable - a view that appears to be contradicted by the evidence: life expectancy increases almost everywhere, instead of decreasing, and costs of basic foods and raw materials are not increasing.

Therefore, these reports have had little influence on individual lifestyles. Yet, statistics accumulated over some years now show clearly deterioration in global resources. Every scientist has seen the statistics on energy consumption, on-air and soil and water pollution, on the increase of greenhouse gases in the atmosphere, ozone depletion in the upper part of the atmosphere, and ozone accumulation in the lower part. And they know from model calculations of atmospheric chemistry that the ozone hole increases ultraviolet radiation, and from the results of general circulation models one expects global warming and a rise of the sea level.

Something must be done and must be done on a large scale. However, one great problem of the crisis is that decisions must be made today, before the need has become generally apparent, to prevent adverse effects that are projected to occur in a more or less distant future. There is widespread agreement that humanity should start securing and improving its water resources in order to adequately deal with the other environmental problems that may arise.

The United States is relatively well endowed with water. Annual precipitation averages nearly 30 inches or 4,200 billion gallons per day (bgd) throughout the conterminous forty-eight states. Two-thirds of the precipitation is quickly evaporated and transpired back to the atmosphere; the remaining one-third flows into the nation's lakes, rivers, groundwater reservoirs, and eventually to the ocean. These flows provide a potential renewable supply of 1,400 bgd, which is nearly fifteen times current daily consumptive use -- the quantity of water withdrawn from but not returned to a usable water source.

Moreover, much larger quantities of freshwater are stored in the nation's surface and groundwater reservoirs. Reservoirs behind dams can store about 280,000 billion gallons (about 860 million acre-feet), even larger quantities are stored in lakes, and water stored in aquifers (subterranean bodies of unconsolidated materials such as sand, gravel, and soil that are saturated with water and sufficiently permeable to produce water in useful quantities) within 2,500 feet of the earth's surface is at least 100 times the reservoir capacity. These stocks are equivalent to more than fifty years of renewable supply. Despite the apparent global and national abundance and the renewability of the resource, water adequacy has emerged as one of the nation's primary resource issues. For many of the developing countries of the world, the problem is a critical one.