How Do We Determine Water Quality?

This is a common question bears some explaining. What exactly do we mean by "water quality"? Water quality can be thought of as a measure of the suitability of water for a particular use based on selected physical, chemical, and biological characteristics. More specifically, water quality is measured against federally passed water quality standards to access its overall safety before reaching the drinking populace. 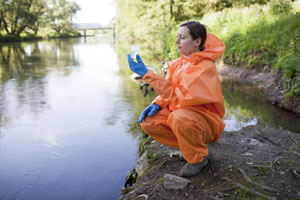 To put it very simply and in basic terms, to determine water quality, scientists first measure and analyze characteristics of the water such as temperature, dissolved mineral content, and number of bacteria. Selected characteristics are then compared to the aforementioned numeric standards and guidelines to decide if the water is suitable for a particular use. Different uses raise different concerns and therefore different standards are considered. Natural water bodies will vary in response to environmental conditions. Environmental scientists are working to understand the functioning of these systems, which determines sources and fates of contaminants. Environmental lawyers and policymakers are working to define water laws that designate the fore mentioned uses and natural conditions. The vast majority of surface water on the planet is neither potable nor toxic. This remains true even if seawater in the oceans (which is too salty to drink) isn't counted.

Another general perception of water quality is that of a simple property that tells whether water is polluted or not. In fact, water quality is a very complex subject, in part because water is a complex medium intrinsically tied to the ecology of the Earth. Industrial pollution is a major cause of water pollution, as well as runoff from agricultural areas, urban stormwater runoff and discharge of untreated sewage (especially in developing countries).

Aside from the definitions about what water quality actually means, the only way water is determined if it is safe for public consumption is put it through scientific testing. To identify the substances present in a stream or lake, scientists collect samples of the water, of living organisms, and of suspended and bottom sediments. Technicians then analyze these samples in a laboratory with specialized instruments and procedures. Certain measurements such as temperature, dissolved oxygen, turbidity and conductivity can be taken in the field with portable equipment. Today's analytical laboratory instruments - with such high-tech names as "plasma emission spectrometer" (for analyzing metals) and "gas chromatograph-mass spectrometer" (for analyzing pesticides, PCBs dioxins, and other organic compounds) - bear little resemblance to the test-tube and gas burner laboratories of the 1950s. Nowadays the analysis of water and sediment samples detects more substances than a decade ago, partly because there are more substances present in water, but also because of improved analytical instruments and consequently lower detection limits. State-of-the-art analytical instruments can detect down to one part per trillion of some substances - comparable to tracing one-thousandth of a teaspoon of salt dissolved in an Olympic-size swimming pool.

As the use of technology heightens the quantitative analysis of water we will surely improve the world's drinking water quality. At the same time, such discoveries will also reveal new problems and pollutions within our water that will demand new water quality standards and treatment methods to continuously produce a successful drinking water for the world's population.

In the future, water quality will continue to be an enormous issue, partly because of the tremendous growth of the Nation's population and urban expansion and development. All this growth puts great stress on the natural water resources, and, if we are not diligent, the quality of our waters will suffer.