Ozone is sometimes called "activated oxygen". It contains three atoms of oxygen rather than the two atoms we normally breathe. Ozone is the second most powerful sterilant there is and it can be used to destroy bacteria, viruses, and odors. Ozone is short-lived and readily decays back to normal oxygen. It is a pungent gas created naturally in the earth? Upper atmosphere by the action of ultraviolet sun light on oxygen molecules. Ozone can be created for water treatment or other purposes by sending air through a special chamber containing a high-voltage spark, which creates a blue plasma corona. Ozone can also be produced by sending air through a chamber radiated by intense ultraviolet light. 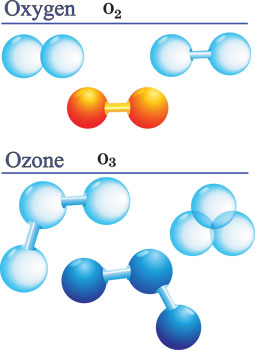 Although ozone does not receive widespread use in the United States as a primary drinking water disinfectant this may change in the future because ozone does have a number of advantages over chlorine and chloramines. Some have reported that ozone can be up to 2500 times as powerful a disinfectant as chlorine under certain conditions (Hamil and Clawson, Water Technology, April 1997). Ozone is capable of destroying all cysts, fungus, viral agents and bacteria instantly, whereas, chlorine is not effective in destroying protozoa cysts and may take 30-60 minutes to destroy bacteria or other agents. Ozone is much more capable of penetrating and destroying bio-films in distribution systems and water wells than chlorine.

Unlike chlorine, ozone does not form halogenated organics like trihalomethane, and in fact actually destroys them. Ozone does not generate byproducts of oxygenation that contaminates a water source because ozone degrades to regular oxygen leaving no harmful residual in the water. And finally, ozone is effective over a much wider pH and temperature range than chlorine, making it more versatile. Once an investment is made in ozone disinfection there are other advantages over a chlorine system. There is no chlorine or chemicals to purchase, no chemical storage or handling needed and no labor requirements to mix chemicals. Therefore, ozone offers lower long-term operating costs and fewer safety concerns to operations staff than chlorine.

In addition to being used as a disinfectant, ozone is not normally used for iron removal because ozone does not remove iron or manganese from water, but it can facilitate their removal. Ozone will oxidize these metals from dissolved forms to particulate (oxidized) forms. Once these metals are oxidized, they can be more easily filtered. In some cases, these metals can settle in a storage tank after ozonation.