Nitrates and nitrites are families of chemical compounds containing atoms of nitrogen and oxygen. Occurring naturally, nitrates and nitrites are critical to the continuation of life on the earth, since they are one of the main sources from which plants obtain the element nitrogen. This element is required for the production of amino acids, which, in turn, are used in the manufacture of proteins in both plants and animals. Phosphorus is essential to the growth of biological organisms, including both their metabolic and photosynthetic processes. Phosphorus occurs naturally in bodies of water mainly in the form of phosphate (i.e., a compound of phosphorus and oxygen).

However, being friends of agriculture, nitrate is not so friendly to water supplies. 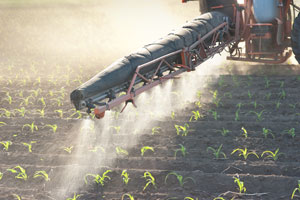 One of the great transformations of agriculture over the past century has been the expanded use of synthetic chemical fertilizers. Ammonium nitrate is one of the most important of these fertilizers. In recent years, this compound has ranked in the top fifteen among synthetic chemicals produced in the United States. The increased use of nitrates as fertilizer has led to some serious environmental problems. All nitrates are soluble, so whatever amount is not taken up by plants in a field is washed away into groundwater and, eventually, into rivers, streams, ponds, and lakes. In these bodies of water, the nitrates become sources of food for algae and other plant life, resulting in the formation of algal blooms. Such blooms are usually the first step in the eutrophication of a pond or lake.

As a result of eutrophication, a pond or lake slowly evolves into a marsh or swamp, then into a bog, and finally into a meadow. Nitrates and nitrites present a second, quite different kind of environmental issue. These compounds have long been used in the preservation of red meats. They are attractive to the industry not only because they protect the meat from spoiling, but also because they give meat the bright red color that consumers expect. The use of nitrates and nitrites in meats has been the subject of controversy, however, for at least twenty years. Some critics argue that the compounds are not really effective as preservatives. They claim that preservation is really affected by the table salt that is usually used along with nitrates and nitrites. Furthermore, some scientists believe that nitrates and nitrites may themselves be carcinogens or may be converted in the body into a class of compounds known as nitrosamines, compounds that are known to be carcinogens.