HOW WILL GLOBAL WARMING AFFECT RIVERS AND LAKES?

The latest scientific data confirm that the earth's climate is rapidly changing. Global temperatures increased by about 1 degree Fahrenheit over the course of the last century, and will likely rise even more rapidly in coming decades. The cause? A thickening layer of carbon dioxide pollution, mostly from power plants and automobiles, traps heat in the atmosphere. 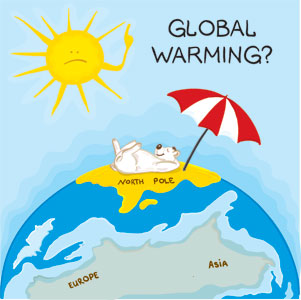 Scientists say that unless global warming emissions are reduced, average U.S. temperatures could rise another 3 to 9 degrees by the end of the century -- with far-reaching effects. Local rivers will swell beyond capacities only to have levels drop far beyond acceptable levels. Sea levels will rise, flooding coastal areas. Heat waves will be more frequent and more intense. Droughts and wildfires will occur more often. Disease-carrying mosquitoes will expand their range. And species will be pushed to extinction. Unfortunately, many of these changes have already begun. Average temperatures will rise, as will the frequency of heatwaves. What are the warning signs?

Most of the United States has already warmed, in some areas by as much as 4 degrees Fahrenheit. In fact, no state in the lower 48 states experienced below-average temperatures in 2002. The last three five-year periods are the three warmest on record. Many places in North America had their hottest seasons or days on record in the late 1990s. Since 1980, the earth has experienced 19 of its 20 hottest years on record, with 2005 and 1998 tied for the hottest and 2002 and 2003 coming in second and third. Warmer temperatures could also increase the probability of drought. Greater evaporation, particularly during summer and fall, could exacerbate drought conditions and increase the risk of wildfires, not to mention cause water quality issues phenomenal in their health risks to customers.

September 2001 to February 2002 was the second driest six-month period on record for the Northeast.

Warmer temperatures increase the energy of the climatic system and lead to more intense rainfall at some times and in some areas. Warning signs today of intense rainfall. National annual precipitation has increased between 5 and 10 percent since the early 20th century, largely the result of heavy downpours in some areas. · Vermont, New Hampshire, Rhode Island, and Massachusetts each got more than double their normal monthly rainfall in June 1998. Severe flooding in Texas, Montana, and North Dakota during the summer of 2002 caused hundreds of millions of dollars in damage.

What are the health effects of Global Warming? Obviously, the demand for safe drinking water will only increase, as will the usage of water. Unless new technologies can monitor the changing water treatment issues, we can expect more waterborne illness and complications, particularly among the elderly. More frequent and more intensive heat waves could result in more heat-related deaths. These conditions could also aggravate local air quality problems, already afflicting more than 80 million Americans. Global warming is expected to increase the potential geographic range and virulence of tropical diseases as well.

What are the warning signs today of health effects of global warming?

The increase in global temperatures is expected to disrupt ecosystems and result in loss of species diversity, as species that cannot adapt die off. The first comprehensive assessment of the extinction risk from global warming found that more than one million species could be committed to extinction by 2050 if global warming pollution is not curtailed. Some ecosystems, including alpine meadows in the Rocky Mountains, as well as tropical montane and mangrove forests, are likely to disappear because new warmer local climates or coastal sea-level rise will not support them.

A recent study published in the prestigious journal Nature found that at least 279 species of plants and animals are already responding to global warming. Species' geographic ranges have shifted toward the poles at an average rate of 4 miles per decade and their spring events have shifted earlier by an average of 2 days per decade. In Washington's Olympic Mountains, the sub-alpine forest has invaded higher elevation alpine meadows. In Bermuda and other places, mangrove forests are being lost. In areas of California, shoreline sea life is shifting northward, probably in response to the warmer ocean and air temperatures. Over the past 25 years, some penguin populations have shrunk by 33 percent in parts of Antarctica, due to declines in winter sea-ice habitat.

The effects of Global Warming upon rivers and streams, in the end largely depends on the location of the river or stream. But the evidence obviously shows that Global Warming will put demands and pressures on water sources for improved filtration, disinfection, and monitoring among many other treatment issues.