The store will not work correctly in the case when cookies are disabled.
Christmas Sale: Free Shipping on orders $39+; Extra 8% Off on All Whole House Systems with code XMAS2022
Menu
Account

What Is Spring Water and How Is It So Safe?

Spring is a kind of water resource. It is formed when the side of a hill, a valley bottom, or other excavation intersects a flowing body of groundwater at or below the local water table, below which the subsurface material is saturated with water. Spring is the result of an aquifer being filled to the point that the water overflows onto the land surface. They range in size from intermittent seeps, which flow only after much rain, to huge pools flowing hundreds of millions of gallons daily. 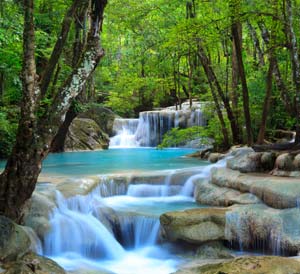 Springs are not limited to the Earth's surface, though. Recently, scientists have discovered hot springs at depths of up to 2.5 kilometers in the oceans, generally along mid-ocean rifts (spreading ridges). The hot water (over 300 degrees Celsius) coming from these springs is also rich in minerals and sulfur, which results in a unique ecosystem where unusual and exotic sea life seems to thrive.

Springs may be formed in any sort of rock. Small ones are found in many places. In Missouri, the largest springs are formed in limestone and dolomite in the karst topography of the Ozarks. Both dolomite and limestone fracture relatively easily. When weak carbonic acid (formed by rainwater percolating through organic matter in the soil) enters these fractures it dissolves bedrock. When it reaches a horizontal crack or a layer of non-dissolving rock such as sandstone or shale, it begins to cut sideways, forming an underground stream.

As the process continues, the water hollows out more rock, eventually admitting airspace, at which point the spring stream can be considered a cave. This process is supposed to take tens to hundreds of thousands of years to complete. The amount of water that flows from springs depends on many factors, including the size of the caverns within the rocks, the water pressure in the aquifer, the size of the spring basin, and the amount of rainfall.

Human activities also can influence the volume of water that discharges from spring-ground-water withdrawals in an area can reduce the pressure in an aquifer, causing water levels in the aquifer system to drop and ultimately decreasing the flow from the spring. Most people probably think of spring as being like a pool of water-and normally that is the case. But springs can occur when geologic, hydrologic, or human forces cut into the underground layers of soil and rock where water is in movement. Water from springs usually is remarkably clear. Water from some springs, however, may be "tea-colored". Its red iron coloring and metals enrichment are caused by groundwater coming in contact with naturally occurring minerals present as a result of ancient volcanic activity in the area.

In Florida, many surface glasses of water contain natural tannic acids from organic material in subsurface rocks, and the color from these streams can appear in springs. If surface water enters the aquifer near a spring, the water can move quickly through the aquifer and discharge at the spring vent. The discharge of highly colored water from springs can indicate that water is flowing quickly through large channels within the aquifer without being filtered through the soil. The quality of the water in the local ground-water system will generally determine the quality of spring water.