The store will not work correctly in the case when cookies are disabled.
2/3 - 2/5 Flash Sale: Free Shipping on Entire Order.
Menu
Account

Biochemical oxygen demand (BOD) is a measure of the quantity of oxygen used by microorganisms (e.g., aerobic bacteria) in the oxidation of organic matter. Natural sources of organic matter include plant decay and leaf fall. However, plant growth and decay may be unnaturally accelerated when nutrients and sunlight are overly abundant due to human influence. Urban runoff carrying pet wastes from streets and sidewalks; nutrients from lawn fertilizers; leaves, grass clippings, and paper from residential areas, are all contributors to increase oxygen demand.The increasing oxygen consumed in the decomposition process robs other aquatic organisms of the oxygen they need to live. Therefore, organisms that are more tolerant of lower dissolved oxygen levels may replace a diversity of natural water systems containing bacteria, which need oxygen (aerobic) to survive. These organisms are part of the decomposition cycle and they feed on dead algae and other dead organisms. 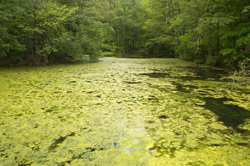 Let us take a more complete look into the oxygen cycle in aquatic systems. At beginning of the cycle, algae and other producers in the water take up inorganic nutrients and use them in the process of building up their organic tissues. Consumers like fish and other aquatic animals eat some of the producers, and the nutrients move up the food chain. When these organisms die, bacteria decompose the organic compounds and release into the water inorganic nutrients such as nitrate, phosphate, calcium, and others. Some of these nutrients end up at downstream or in sediments, but most of them recycle again and again. Most of the bacteria in the aquatic water column are aerobic. That means that they use oxygen to perform their metabolic activities of decomposition. Remember that we learned in other related exercises that under normal conditions, dissolved oxygen exists in very low concentrations. Natural levels of oxygen in aquatic systems are always somewhat depleted by normal levels of aerobic bacterial activity. In most cases, if dissolved oxygen concentrations drop below 5 parts per million (ppm), fish will be unable to live for very long. All clean water species such as trout or salmon will die well above this level and even low oxygen fish such as catfish and carp will be at risk below 5 ppm.

When abnormally high levels of aerobic bacterial activity take place, however, the level of dissolved oxygen can drop dramatically. Under what kind of circumstances does such change happen? Generally, these abnormal bacterial activities occur when there is some sort of abnormal "pollution" introduced into the system. This can occur in the form of organic pollution for sources such as domestic sewage, septic tank leakage, and fertilizer runoff, or could be in the form of inorganics from domestic or industrial sources such as contaminated man-made products. Natural sources of organic compounds can also come into aquatic systems by means of floods, landslides, and erosion.

Read Next: Oxygen in Your Drinking Water Supply