You are probably be familiar with the water cycle (technically known as the hydrological cycle), do you know what it can do to help us from its continuous movement of water over, above, and beneath the Earth's surface. As water moves around in the hydrosphere, it changes state among liquid, vapor, and ice. During the process through which a liquid becomes a vapor, it is defined as Evaporation.

When the air cools, the water vapor condenses in the clouds and falls to the earth it hits the ground and is absorbed in many ways. It can be absorbed by plants, stored on the surface in a lake, stream, ocean, or evaporated by the sun. It can also be absorbed into the soil or pulled through the soil for years as groundwater. The water used by plants can go back into the earth by transpiration. Transpiration is the process by which moisture is carried through plants from roots to small pores on the underside of leaves, where it changes to vapor and is released into the atmosphere. You are probably thinking, how is this possible? I don’t see plants sweating! Just because you can’t see the water doesn’t mean it is not being brought to the air. During a growing season, a leaf will transpire many times more water than its own weight. For example, a large oak tree can transpire 40,000 gallons of water per year!

Minerals like salt and other substances dissolved in water are left behind. As a result, when the water vapor condenses to become water again, it is relatively pure. The evaporation and condensation are the key terms that help water purifying. While these processes occur during the water cycle, it can also be used to purify water for drinking or industry use. Water is always moving. The movement is driven by the energy of the sun and the force of gravity. Here, a simple experiment that you can do at home, it will help you understand how the water cycle helps to purify water. 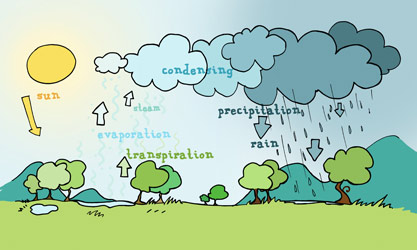