How to Use Water Effectively

The convenience of tap water makes many people think of water as an unlimited resource. However, the reality is that only one percent of all the world’s water can be used for drinking. Nearly 97 percent of the world’s water is salty or otherwise undrinkable, and the other two percent is locked away in ice caps and glaciers. There is no “new” water: we are using the same water the dinosaurs used millions of years ago.

The average American uses about 90 gallons of water each day in the home, and each American household uses approximately 107,000 gallons of water each year. In fact, 50-70 percent of home water is used for watering lawns and gardens. Surprisingly, nearly 14 percent of the water a typical homeowner pays for is never even used—it leaks down the drain. In comparison to other countries, Americans use much more water each day than individuals in both developed and undeveloped countries: For example, the average European uses 53 gallons; the average Sub-Saharan citizen, 3-5 gallons. 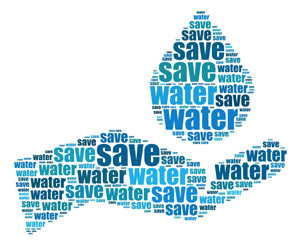 The national average cost of water is $2.00 per 1,000 gallons. The average American family spends about $474 each year on water and sewage charges. American households spend an additional $230 per year on water heating costs. Although, in most cases, combined water and sewer bills average only about 0.5 percent of household income. By using water wisely, you can save hundreds of dollars each year.