The alkalinity refers to the measure of water’s capability to neutralize the acids. Alkalinity of water may be due to the presence of one or more of a number of ions. These include hydroxides, carbonates, and bicarbonates. As discussed in previous articles, hydroxide ions are always present in water, even if the concentration is extremely low. However, significant concentrations of hydroxides are unusual in natural water supplies but may be present after certain types of treatment. Small amounts of carbonates are found in natural water supplies in certain sections of the country, rarely exceeding 3 or 4 gpg(grain per gallon). They may also be found in the water after lime soda has been used to soften the water. Bicarbonates are the most common sources of alkalinity. Almost all natural supplies have a measurable amount of this ion, ranging from 0 to about 50 gpg. 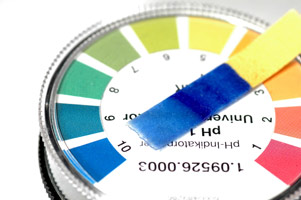 The alkalinity of water may be defined as its capacity to neutralize the acid. Alkali substances in water include hydroxides or bases. They can be detected by their acrid taste and by the fact that they cause red litmus paper to turn blue.

Phosphates and silicates are rarely found in natural supplies in concentrations significant in the home. Compounds containing these ions may be used in a variety of water treatment processes. Moderate concentrations of alkalinity are desirable in most water supplies to balance the corrosive effects of acidity. However, excessive quantities cause a number of problems. These ions are, of course, free in the water, but have their counterpart in cations such as acidity, magnesium and sodium or potassium.

You probably will not notice an alkaline condition due to bicarbonate ions except when present in large amounts. In contrast, you should readily detect alkalinity due even to fairly small amounts of carbonate and hydroxide ions.

Strong alkaline water has an objectionable "soda" taste. The EPA Secondary Drinking Water Regulations limit alkalinity only in terms of total dissolved solids (500 ppm) and to some extent by the limitation on pH value.

Read Next: What is Alkalinity?