The water in a raindrop is one of the cleanest sources of water available. Rainwater can absorb gases such as carbon dioxide, oxygen, nitrogen dioxide, and sulfur dioxide from the atmosphere. It can also capture soot and other microscopic particulates as it falls through the sky. Nevertheless, rainwater is almost 100% pure water before it reaches the ground. 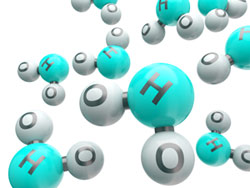 Oxygen gas is one of the most important elements collected from falling rainwater. This dissolved oxygen is not the same as the oxygen in the water molecule. Dissolved oxygen is present in all rainwater and surface supplies due to contact with the atmosphere. Living organisms in lakes, rivers, streams, and oceans need oxygen to survive therefore dissolved oxygen is essential in an aquatic environment but unfortunately, it is not very abundant. While air consists of 21% oxygen, the oxygen content in water is only 0.001%! Just how much dissolved oxygen can be found in a water supply will depend on several factors:

Well waters usually contain smaller amounts of dissolved oxygen than surface supplies. In deep wells, there may be a total absence of gas. However, an article in Science Magazine, June 11, 1982, pages 1227-30, states:

Contrary to the prevailing notion that oxygen-depleting reactions in the soil zone and in the aquifer rapidly reduce the dissolved oxygen content of recharge water to detection limits, 2 to 8 milligrams per liter of dissolved oxygen is present in water from a variety of deep (100 to 1000 meters) aquifers in Nevada, Arizona, and the hot springs of the folded Appalachians and Arkansas. Most of the waters sampled are several thousand to more than 10,000 years old, and some are 80 kilometers from their point of recharge.